Project Overview
Hello! I’ve been working on a small web app called the lil nouns trait finder. You can find it live at https://lilnouns.traits.wtf. The idea sprouted out of a need to find lil nouns that had certain combinations of traits. Previously there was no way to find lil nouns with certain traits, since opensea (usually the default) does not support filtering by trait. Now there are sites that allow for filtering by trait like the Nounish Market but my trait finder is unique in that you can visually build up a lil noun by trait and compare each lil noun that matches to your own. Not only is it useful for finding existing lil nouns, but it’s great fun to compose your own and dream up which lil noun combos you would love to own.

Why
This project aligns with the Lil Nouns DAO because it enables people to better search for lil nouns that they might be after, and allows people to have some fund building lil nouns in a more visual way than currently exists. The look and feel of the app is also quite “nounish” if you ask me!

Current Progress
The app is done and in a stable point. The are many features that could be improved, but I would probably want to request another round of funding to keep working on v2 features, since I’ve already sunk a considerable amount of time into this and it feels about on par with other projects that are getting around 1 ETH of funding.

Please feel free to comment ideas for v2 if that is something you would like to see! The biggest v2 feature I have thought of is being able to “subscribe” to certain features. For example, I would “subscribe” to frog head, and if any nouns with frog head went up for auction, I would get a DM from a discord bot letting me know, so I could bid. This way, I would not have to keep checking every 15 minutes to see if there is a frog. Possibly we could set it up so you could fund a wallet that you automatically bid for you on lil nouns with certain traits. However, these features are much more complex, and I would have to request more funding. 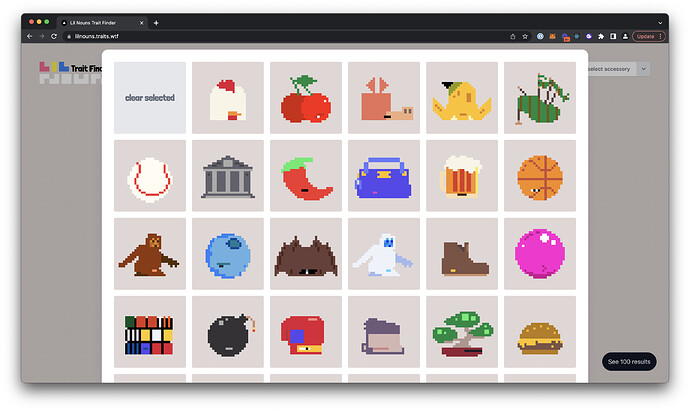 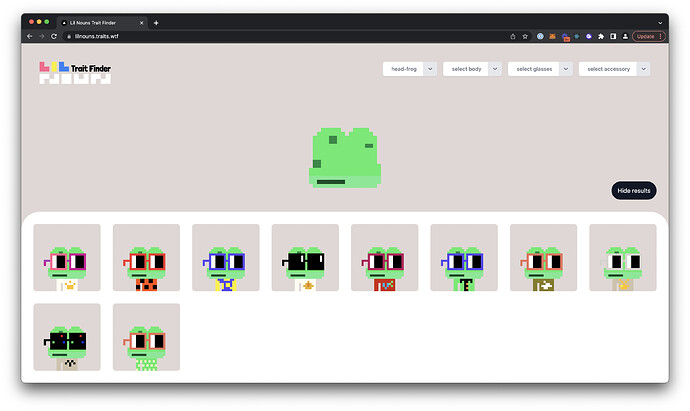 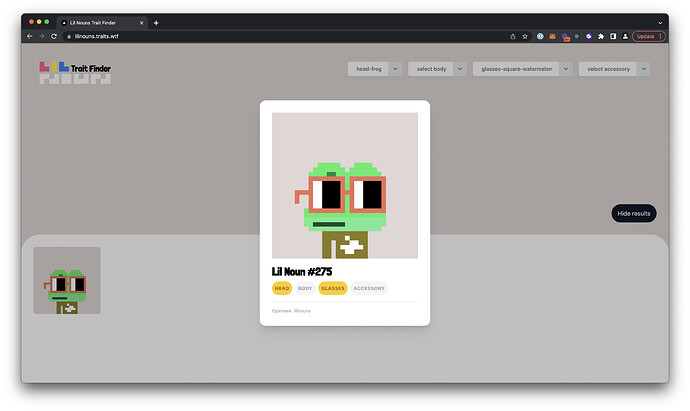 Timeframe
Complete. I have been encouraged to request retroactive funding from lil-grants after losing the first two rounds of prop house

Further Information
frog#3881 on discord if you’d like to DM and talk more!

I love this! I have this site in our official links and refer it to people all the time. I’d like to get you some retro funding on this.

Love the work you have done. Support retro funding

def think this is a great usage of lil grants.

I d have a question. are their differences between this and the nouns marketplace one

why use one over the other? I like them both and searching by visual head is VERY nice on this one!

Hi! I’m glad you like the visual searching aspect of this site. To be honest, there isn’t a strong reason to use one over the other. I think it comes down to personal preference. In my opinion, this site feels a bit more “nounish” and is a whimsical experience building up the noun you are searching for over other options which feel more akin to what you would find on opensea. There is no right or wrong though!

Great idea! Full support as well. … Question: I’ve noticed glasses seem to cap at 100 results. Will this eventually display all listings? I assume we have more than 100 of each glasses color.

Would be great to also feature a page that displays a quick visualization ranking the most rare, or common traits

Congrats on getting funded! Txn’s just went out.

@al409.eth thanks so much! I appreciate the support everyone <3
It’s really cool to see an idea come to life and get some love from the community.

@mikegood thanks a really great call. I forgot that pagination isn’t set up yet, so yes, it’ll be capped at 100. I can make a fix for that.

As for rarity, that’s another cool idea, but possibly within scope of v2

So glad you were retro funded, this is great and it’s what I use. Fully support v2 funding. Do you already have a sprint of items you’d like to include?

So far my list of v2 ideas contains mostly UX improvements. Pagination would be great to have, and I have requests to enable searching for traits rather the relying on the visual only interface.

My ultimate aspiration is to make it so you could be notified of your saved nouns. For example, you could save banana head as a trait, and get discord notifications anytime a new auction started with a banana head.

Do you have any ideas that you would like to see?

Love this. Congrats on getting funded, 100% support this

Really love this. Creative and whimsical. Glad you got retro funding.